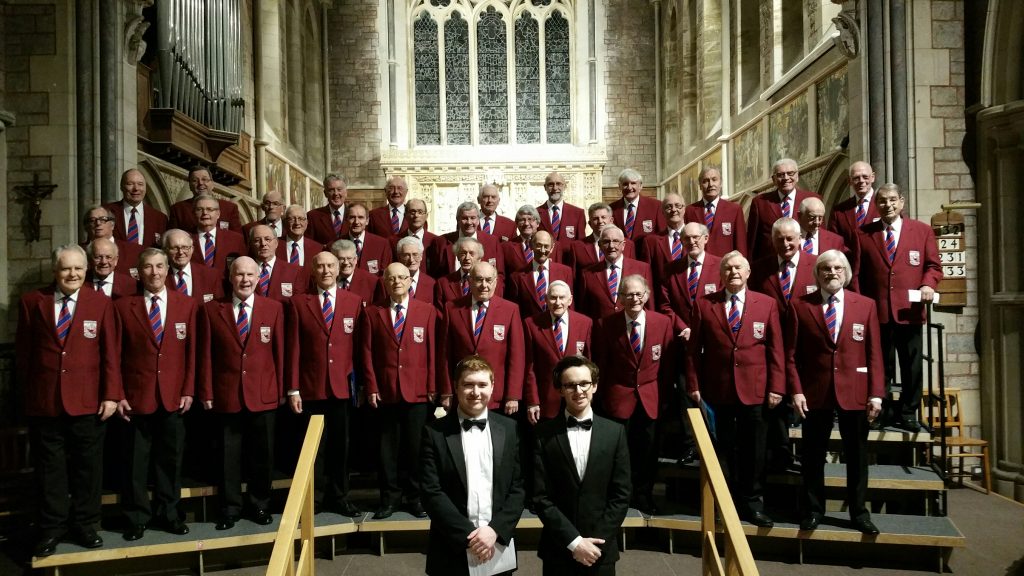 Fantastic end to the year. On Friday 16 December we joined with five other choirs at Exeter Cathedral for “The Big Festive Sing”. A packed cathedral and we sang our three festive songs to raptuous applause!
Then on Saturday 17 December we had our Christmas Concert at St Peter’s Church, Budleigh, when we were joined by the Budleigh Ladies Choir. Another full house with proceeds going to the church organ fund. These concerts brings to a close a busy and exciting year for the choir! We have had a succession of successful concerts in Exmouth, Budleigh, Sidmouth, Crediton, Ottery St. Mary, Honiton and Exeter while raising about £7500 for charities. We have shared the stage with other choirs, including Barnstaple MVC, Ystrad Mynach MVC, Lympstone Military Wives, and Centre Stage and also with SW Comms Band. In addition we have been lucky enough to have enjoyed some new soloists at our concerts who have been invited by our MD, Michael Graham; these were Tim Mirfin, Iryna Ilnytska and Julia Featherstone, and they have enhanced the level of entertainment that we have given at our concerts.

This year also saw the appointment of Dan Maw as assistant musical director. Dan is a young man who under the tutelage of Michael Graham will be able to assist our learning processes and eventually be able to deputise for Michael if necessary.

One of the highlights of the year was our afternoon concert at Exeter Cathedral in August. This was a new venture for us and we were delighted and surprised to sing to a large audience both in the cathedral and afterwards on the cathedral green. We hope and expect that our close contacts with the cathedral will continue next year.