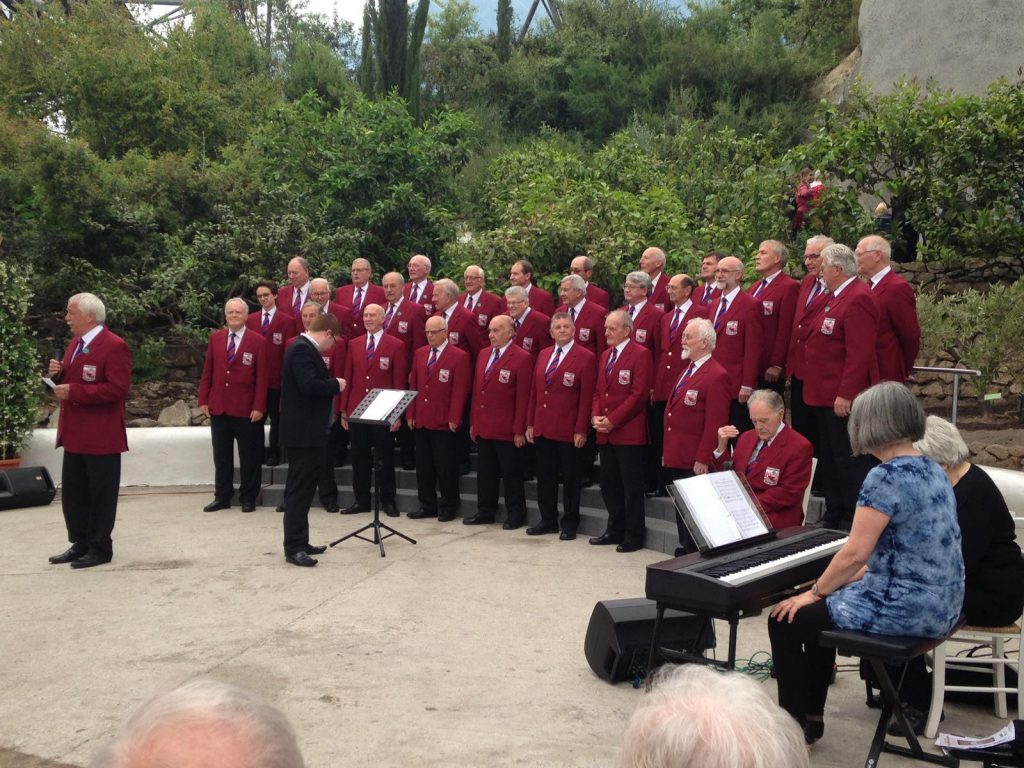 The choir participated in the festival, which attracts male choirs from all over the UK and overseas countries, including Finland, Czech Republic, Germany and Australia to mention just a few.

Our first concert was in Bodmin on Friday evening 28 April with four other choirs. Although we were warned that Bodmin is undergoing a major road reconstruction project, many of us got hopelessly lost in a maze of road works, no entry signs, narrow residential streets taking up to 30 minutes to reach our destination.  Nevertheless we eventually got there on time and performed an entertaining programme of five songs.  Most of the choir were staying in The Esplanade Hotel in Newquay, which provided excellent accommodation, good food and fantastic views of Fistral Bay.  Some of our early risers discovered that the keen surfers start as early as 6.00 am!

On Saturday, the choir competed in the large choir category against seven other choirs in The Hall for Cornwall in Truro. Although we sang to our best ability an entertaining trio of songs and received extremely enthusiastic applause, the judges were not convinced and awarded the top prizes to choirs who perhaps sang more musically technical pieces.  Nevertheless we enjoyed the experience.  We drowned our sorrows later that evening with a convivial dinner in the hotel and singing in the bar led by our accompanist, Sandra.

Sunday was busy (and wet) day with performances at the Eden Project in the afternoon and a concert at Falmouth in the evening, which culminated with three choirs singing Morte Criste and an afterglow in the Rugby Club.

The weekend finished on Monday with a well-attended lunchtime concert in Truro Cathedral. Our MD, Michael, succeeded in requisitioning the cathedral organ and played while Bristol MVC and ourselves sang yet another rousing Morte Criste.

Michael summarised the weekend as follows “What a feast of music and a brilliant display of talent and entertainment from our choir. There are too many awesome moments to recount (even taming the Truro cathedral organ on Monday) but both musically and socially it was an incredible event all round.”